That great philosopher, Yogi Berra, once quipped that “it ain’t over till it’s over.” Justice Amy Coney Barrett could have used that phrase to summarize her first signed majority opinion since joining the Supreme Court. Writing for a 7–2 majority, the newest justice ruled that the deliberative process privilege protects an agency’s non-final draft 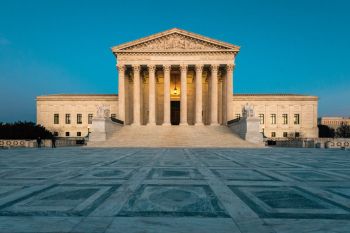 This case involved interagency communications regarding protection of aquatic wildlife.  The EPA proposed a rule on the design and operation of “cooling water intake structures,” which—as we all know— draws large volumes of water to cool industrial equipment. The problem is that the water drawn contains fish and other aquatic wildlife.

If an EPA rule may adversely affect a protected species, then the agency must seek a “biological opinion” from the U.S. Fish & Wildlife Service and National Marine Fisheries Service regarding whether the EPA’s proposed rule will jeopardize endangered species. The Services characterize these opinions, simply enough, as a “jeopardy” or “no jeopardy” opinion.

I am sure there is a Yogi-ism in there somewhere.

The EPA sent a proposed rule to the FWS/NMFS in 2013, and these Services agreed to issue a draft jeopardy or no-jeopardy opinion by December 6, 2013 and a final opinion by December 20, 2013. The Services issued their draft opinion, but the decisionmakers did not issue a final opinion—instead deciding that “more work needed to be done” and to continue discussions with the EPA.

The Sierra Club noticed this and filed a FOIA suit seeking the Services’ December 2013 “draft opinion” because it was effectively a final opinion.

The FWS/NMFS refused to disclose the draft opinion, claiming that the deliberative process privilege protected it under Exemption 5 to FOIA. The deliberative process privilege protects governmental agencies’ pre-decisional advisory opinions, recommendations, debates, discussions, and other deliberations that comprise the governmental decision-making process. The purpose is to encourage agency officials to communicate candidly while debating various courses of action. The absence of such protection would chill debate and lessen the effectiveness of the ultimate decision.

Dying on the Vine

So, was the Services’ action-provoking December 2013 “draft” opinion predecisional, meaning generated before the Services’ “final” opinion? Justice Barrett noted that a document “is not final because nothing else follows it” as often “a proposal dies on the vine.” The question, then, is “not whether a document is last in line, but whether it communicates a policy on which the agency has settled.”

Courts must consider whether the agency treated the document sought as its “final view on the matter.” In other words, does the document have “real operative effect”? If the document leaves the agency’s decisionmakers “free to change their minds,” then the document is not final for privilege-protection purposes.

Here, the Services’ draft opinion was labeled “draft.” And while not dispositive, that is some indication that the Services could “change their mind.” But the context, too, proved the draft, predecisional status. In fact, a regulation, 50 CFR § 402.14(g)(5), contemplates that the Services will provide the EPA with a draft for review with the “possibility of changes to the biological opinion after the Services” send the draft to the EPA. (emphasis by Justice Barrett).

But the Sierra Club argued that the Services’ December 2013 draft jeopardy opinion effected change—it caused the EPA to submit a significantly different rule. Justice Barrett recognized that a draft opinion “might carry a practical consequence if it prompts agency action,” but holding as “final” any agency action that provokes a response “would gut the deliberative process privilege.”

The justice rejected this “effects-based” test, holding instead that—

To determine whether the privilege applies, we must evaluate not whether the drafts provoked a response from the EPA but whether the Services treated them as final.

The Services did not treat the draft opinion as final. Instead, like countless agency opinions, this one “died on the vine.” Justice Barrett upheld the privilege, and the Sierra Club will never see that draft jeopardy opinion.

Justice Barrett did not author any significant privilege-related opinions while on the Seventh Circuit bench, so this appears to be her first foray, as a jurist, into the privilege world. We will be watching to see how she handles future privilege issues because, as Yogi would say, you can observe a lot just by watching.