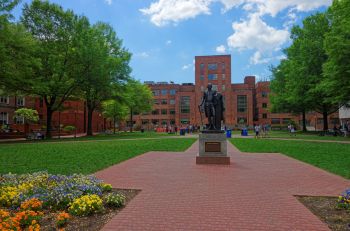 University. The ruling came even though the lawyer did not receive the privileged information through an inadvertent document production by GW. Rather her client sent the emails without GW’s authorization or knowledge. EEOC v. The George Washington Univ., 2020 WL 6504573 (D.D.C. Nov. 5, 2020). You may read the decision here.

The now-former GW Athletic Director, Patrick Nero, had among his former staff Sara Williams and Michael Aresco. Williams believed that Nero and GW discriminated against her by, in part, paying her a smaller salary that Aresco. The EEOC filed suit in September 2017. Nero resigned as Athletic Director in December 2017, though reportedly not because of the lawsuit. He also received a $1.3M severance.

While Williams was still employed and the lawsuit pending, Williams took emails between her and GWU in-house counsel—relating to routine business matters, not the lawsuit—and provided them to the EEOC. Neither GW personnel nor its counsel knew about or authorized this transmission.

During some other discovery-related squabbles, GW asked the EEOC to confirm that it had produced all documents responsive to its discovery requests. The EEOC resisted, apparently arguing that the work-product doctrine protected them. Curious.

This discovery issue reached the court, which ordered the EEOC to produce the work-related emails that Williams transmitted to EEOC lawyers. The emails that the EEOC produced included two email chains that involved GW’s in-house counsel.

A Demand and a Review

In response, GW sent the EEOC a pointed letter, available to review here, stating that the attorney–client privilege protected the email chains and demanding that the EEOC “immediately sequester and destroy all copies” of the emails.

Did the EEOC lawyer comply? No.  In fact, as you can read in the attorney’s declaration, available here, she reviewed the email “headers” and then “glanced at” or “skimmed” the emails. And guess what? From this review she determined that the attorney-client privilege did not protect the emails from disclosure.

She then attached a note to the emails that read: “Do not look at.”

Though the EEOC worked hard to twist its plain language, FRCP 26(b)(5)(B) states that, upon being notified that a party claims privilege over “information produced in discovery,” the receiving party “must promptly return, sequester, or destroy the specified information and any copies it has.”

Interpreting this rule, the court held that, when a party makes a claim of privilege pursuant to  FRCP 26(b)(5)(B), the opposing party has two choices:

1.  It may accept the privilege claim; or

2.  It may challenge the privilege claim by providing the material under seal to the court for determination of the privilege issue.

What the receiving party cannot do is “review the material to determine for itself whether the claimed privilege applies.” The rule “does not contemplate that the party in possession of the allegedly privileged material will or should make that determination on its own.”

The reason? Quite simply, the hold-don’t-review rule safeguards the confidentiality fostered by the attorney–client privilege.

Here, the EEOC lawyer admittedly reviewed the privileged emails of GW’s in-house lawyer after receiving a 26(b)(5)(B) demand from GW counsel. And she clearly violated this rule, the court ruled.

The EEOC also “argued” that FRCP 26(b)(5)(B) does not apply here because it did not receive the privileged emails as part of “information produced in discovery.” Rather, the EEOC’s client—Williams—provided the emails (without authorization). The court noted that the EEOC’s argument was “squirreled away in a footnote, which is no place to raise a substantive point.”

The court quickly dispensed with this argument. The rule states that “any party” may claim privilege which triggers “any party that received the information” to comply with the rule’s requirements. And in any event, the EEOC produced the documents back to GW, so the parties clearly exchanged the emails during the discovery process.

The court pointed out that Rule 26(b)(5)(B) incorporates rules of professional responsibility. And Rule 1.6 of the D.C. Rules of Professional Conduct mandates that lawyers maintain client confidences. While this rule does not specifically mention the ethical responsibilities triggered upon receipt of inadvertently disclosed privileged information, an ethics opinion does.

As the court noted, Ethics Opinion 256, available here, provides that receiving lawyers should return the privileged information—unread—upon the producing lawyer’s request or demand. “In other words, when an attorney has been put on notice that she has received material to which she is not entitled, her review of that material would be unethical.”

The court noted these ethical obligations but stopped there—it did not affirmatively state that an ethical violation occurred.

So, what is the remedy? FRCP 26(b)(5)(6) does not contain or incorporate remedies for violations. And FRCP 37 does not apply short of violation of a court order, which did not occur here.  The court, therefore, relied on its inherent authority to police this situation and, of course, ordered the EEOC to return or destroy all copies of the privileged materials and certify its compliance.

Does this story sound familiar? If so—you’re right. Earlier in 2020, a different EEOC attorney received an adversary GC’s privileged text messages and “briefly reviewed” them. But because those emails were not “obviously privileged,” she did not violate FRCP 26(b)(5)(B) and therefore eluded sanctions. You may read more about this event at Obviously Privileged? EEOC Attorney Escapes Disqualification after Reading Country Club GC’s Text Messages.