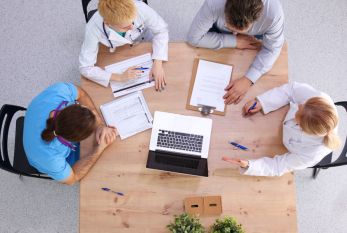 After a Redbanks resident passed away, the administrator of her estate sued Redbanks for failing to provide proper care.  During discovery, the administrator sought production of the Wells consultant reports, but Redbanks claimed that a federal statutory peer-review privilege protected them from disclosure.  The trial court rejected the privilege, and Redbanks took the matter to the Kentucky Supreme Court.

The Nursing Home Reform Act of 1987 contains two sections that address discovery of peer-review related materials: 42 USC § 1396r(b)(1)(B) and 42 USC § 1395i-3(b)(1)(B).  These identical statutes require nursing-home facilities like Redbanks to maintain a “quality assessment and assurance committee” to identify issues within the facility and implement appropriate corrective actions where necessary.  As to the discovery of the committee’s work, the statutes say this—

The pertinent question concerns the scope of the phrase “records of such committee.”  Does it pertain to records compiled by third-party consultants—like Wells—or is it limited to the quality-assurance committee’s internal records.  Court have taken two approaches—a narrow approach and a broad approach, or the so-called Missouri Rule and New York Rule.

The New York Rule originates in In re Subpoena Duces Tecum to Jane Doe, Esq., 757 N.E.2d 618 (N.Y. 2003).  The court rejected Boone’s narrow interpretation and read “records of such committee” broadly to encompass “any reports generated by or at the behest of a quality assurance committee for quality assurance purposes.” Id. at 621. A Georgia federal court found the New York interpretation to be “the more reasoned view.” U.S. v. Lilburn Geriatric Ctr., Inc., 2003 WL 27381235 (N.D. Ga. Sept. 23, 2003) (available here).

So, which way would the Commonwealth go? The court, appropriately, engaged in a balancing of discovery and privilege-related interests.  On the one hand, a plaintiff like the administrator here is entitled to all relevant evidence to prove his claim and courts should interpret discovery-blocking privileges narrowly to fulfill that goal.

On the other hand, the court said, public policy–here embodied in a federal statute–should encourage healthcare facilities like Redbanks to engage in self-critical analyses to improve its provision of health care. The peer-review privilege does just that—it encourages providers to speak and evaluate candidly without fear that a plaintiff will one day use their words and evaluations against them.

Weighing these interests, the Kentucky court followed the broader rule and held that the federal peer-review statute for skilled nursing facilities was not limited to a quality-assurance committee’s own records, but rather covered reports generated by third parties for the committee. In doing so, the court stressed that courts should perform future analyses on a case-by-case basis and offered these guidelines.

First, a nursing-home facility cannot use its quality-assurance committee to create a privilege by funneling unprivileged records through it. The privilege will also not cover documents given to the committee—but generated outside of it—that do not relate to the committee’s work.

Applying these guidelines, the Kentucky Supreme Court found that the privilege protected the Wells’ nurse-consultant reports. Redbanks proved that it contracted with Wells to evaluate the facility’s quality of care and provide guidance on how to improve that care.