A Washington appellate court has handed healthcare providers and their 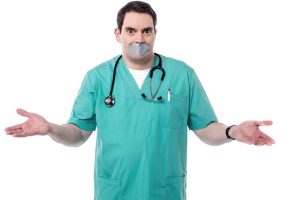 lawyers another privilege blow. Following privilege-restricting opinions in 2014 and 2016, a court rejected the functional-equivalent doctrine and ruled that the attorney–client privilege does not permit ex parte communications between a hospital’s lawyer and its physician–agent.

The privilege is non-existent even though the physician–agent had an office at the hospital and the hospital was responsible for his actions. Hermanson v. MultiCare Health System, Inc., 2019 WL 4021900 (Wash. Ct. App. Aug. 27, 2019) You may read the decision here.

And in Newman Highland Sch. Dist., 381 P.3d 1188 (Wash. 2016), which I examined in this post, the 5–4 divided court refused to apply the attorney–client privilege to a corporate lawyer’s communications with former employees. Notably, the court rejected the privilege because there is no principal–agency relationship once the employer–employee relationship ends.

Hermanson presented an issue influenced but unaddressed by Youngs and Newman: does the corporate attorney–client privilege apply to a non-employee hospital agent?

Should I Have Not Said That?

While allegedly driving with a BAL of 330mg/dL, Doug Hermanson unsurprisingly hit a parked car and then slammed into a power pole. Hermanson’s head penetrated the windshield, and EMTs transported him to Tacoma General Hospital, owned by MultiCare Health System, Inc., where Dr. David Patterson treated him.

In an effort to address the lack of adult-trauma services in the Tacoma area, MultiCare and other corporate and governmental hospital systems created Trauma Trust, a non-profit entity, to provide trauma services for the hospitals.

Trauma Trust maintains its office at Tacoma General and employs physicians who provide trauma services. Although employed by Trauma Trust, the physicians are agents of MultiCare, and MultiCare is responsible for the medical services they provide.

Dr. Patterson, Hermanson’s treating trauma physician, is a Trauma Trust employee but has an office at Tacoma General and is MultiCare’s agent.

The trial court rejected MultiCare’s privilege argument, finding Youngs inapplicable because Dr. Patterson was not MultiCare’s employee. On appeal, MultiCare argued that the attorney–client privilege should protect its lawyer’s discussions with Dr. Patterson because he is MultiCare’s agent, even if not an employee, and because the functional-equivalent doctrine permits it.

The appellate court, in a 2–1 decision, rejected these interrelated arguments.

Second, although briefly discussing federal courts’ adoption of the functional-equivalent doctrine, the appellate court dismissed the principle with little-to-no analysis, stating simply that Washington courts have not adopted the federal approach.

The dissenting judge recognized the majority’s imperfect analysis. The judge convincingly distinguished Newman, highlighting the significant difference between rejecting the privilege for non-agent former employees and rejecting it for existing agents. The judge emphasized the privilege’s sustaining principles and saw “no compelling justification for departing from those principles simply because [Dr. Patterson] is an agent but not a formal employee.”

The dissent instead advocated adopting the functional-equivalent doctrine, which would allow a corporate healthcare provider’s lawyer to have ex parte privileged communications, consistent with Youngs, with individuals who are the functional equivalent of an employee.

Whether a formal employee or an agent, Dr. Patterson was acting on MultiCare’s behalf—his office was in the building—and was “no different in any relevant respect from an employee of MultiCare.”

For corporate healthcare providers, the Youngs, Newman, and Hermanson trilogy produces a maze-like privilege environment. If a patient sues the corporate entity over its individual healthcare providers’ actions, then the entity’s lawyer may hold ex parte privileged discussions with employed non-party providers, subject to the Youngs restrictions. The lawyer cannot hold privileged discussions with non-employed providers or former employee–providers.

What are Tacoma-area hospitals that rely on Trauma Trust’s physicians to do in light of Hermanson? Do away with the Trauma Trust concept because hospitals must employ the doctors to secure privilege? Is it proper for the physician to retain separate counsel, enter into a common–interest agreement with the hospital and its separate counsel, and share privileged information in that manner?

One can reasonably and persuasively argue that the Newman and Hermanson dissents have the better, more practical view of the corporate attorney–client privilege. Here’s hoping the Washington Supreme Court has the chance to review Hermanson and, in the process, provide clear guidance on the scope and application of the corporate attorney–client privilege to employees and agents, both past and present.

**Epilogue.  On November 12, 2020, the Washington Supreme Court reversed the appellate court’s decision. Read all about the opinion in Major Decision: Washington Sup. Ct. Upholds Privilege for Corporate Healthcare Providers and Their Physician-Agents.