Meeting Client in a Coffee Shop? Be Wary of Privilege Waiver

Lawyers are increasingly meeting individual clients and corporate-client employees in restaurants, coffee shops, and bars.  And this phenomenon is not limited to solo practitioners who use the local Starbucks as an office.  Firm-based 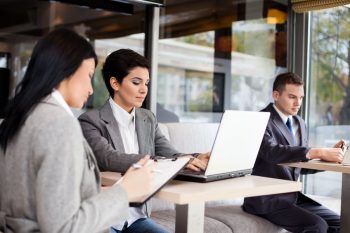 lawyers more often interview a client’s employee or consultant over lunch rather than in their offices.  And in-house lawyers discuss confidential information with corporate employees in the company café.

A key component to the corporate attorney–client privilege is that lawyer–client conversations occur in a confidential setting.  In a recent Oregon case, a lawyer escaped privilege waiver for a meeting held in a restaurant, but only after having to prove that the tables around him were empty and that no one overhead the conversation.  While this was a privilege win, it should give lawyers pause about their client-meeting locations.  MacFarlane v. Fivespice, LLC, 2017 WL 1758052 (D. Ore. May 4, 2017).  You may read this decision here.

A former server at Café Murrayhill in Beaverton, Oregon filed a retaliation suit against the café.  The café’s lawyer met with the executive chef—at the restaurant.  Seems reasonable enough, but the meeting occurred in a restaurant booth and not in a private meeting room.

The server’s lawyer moved to require the chef to disclose the conversation, arguing that the privilege did not apply because the meeting occurred in non-confidential, public setting.

To counter the privilege-waiver argument, the café filed its general manager’s declaration, which you may read here.  The GM said that, while the meeting occurred in a restaurant booth, there “were not many people in the restaurant.”  The booth was “ten feet away from any occupied tables” and the lawyer and chef did not raise their voices.  According to the GM, “no one was within earshot” of the conversation.

Interestingly, the GM stated that the café contained a back office, but it had no windows and that, if he closed the office door, “someone could stand outside of the office and eavesdrop on a conversation in the office” So, rather than meeting in the back office out of an eavesdropping fear, they met in the main area of the restaurant?

The court accepted the GM’s attestations, and held that meeting in a restaurant booth in this manner “was a sufficiently confidential setting for maintaining the attorney–client privilege.”

The café and its lawyer survived this privilege challenge, and the GM’s declaration provides a good roadmap if one ever challenges the privilege of your restaurant-based conversations.  But the greater lesson is that lawyers must not assume that meetings in restaurants, coffee shops, and other public settings are confidential.

Just like elevator conversations, these conversations are subject to intentional or unintentional eavesdropping.  The confidentiality requirement to sustain the attorney–client privilege is an indispensable one, and lawyers should look for private meeting space to lessen the chances of privilege-waiver challenge.  Lawyers beware.