Two well-intentioned gentlemen, Stuart and Eric, want to open a restaurant, and need to form a business entity to do so.  Eric says that his lawyer, Adam, can set up an LLC and draft the operating agreement.  Stuart agrees, perhaps 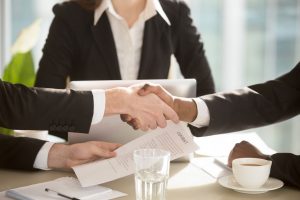 because Adam’s law firm represents him on other matters, and meets Lawyer Adam to sign the operating agreement.

You can guess what happens next.  Stuart becomes unhappy with the restaurant’s business operations, and sues Eric and the LLC for breach of contract, breach of fiduciary duty, and an accounting.  Stuart wants to depose Lawyer Adam, but Adam, citing the attorney–client privilege, refuses to testify about his communications with Eric regarding preparation of the operating agreement.

Several issues arise.  Who is Lawyer Adam’s client—Eric? Stuart? The LLC? All of the above? Does the privilege for Adam’s communications with Eric preclude disclosure to Stuart? What level of proof is necessary to establish the privilege elements?  The court’s decision in Hinerman v. The Grill on Twenty-First, LLC, 2018 WL 2230763 (Ohio Ct. App. May 11, 2018), available here, answers these questions.  Let’s dissect the opinion, and heed its lessons.

The joint–client doctrine applies to situations where one lawyer, or one law firm, represents two or more clients on a matter of common interest.  The doctrine holds that the attorney–client privilege protects communications between the multiple clients and the lawyer from disclosure to third parties, but does not protect those communications if the co-clients later become adverse to one another.  For those interested, this post discusses the doctrine’s contrast with the common–interest doctrine.

Other courts, including Ohio’s, describe the joint–client doctrine as an exception to the attorney–client privilege, labeling it a “joint-representation exception.”  As the Hinerman court stated, this exception “provides that a client of an attorney cannot invoke the privilege in litigation against a co-client.”

Whether a straightforward privilege application or an exception, the maxim is clear: the privilege does not protect joint clients’ communications with their common lawyer when they later become adverse.

The privilege issue in Hinerman, therefore, hinged on whether Lawyer Adam had a lawyer–client relationship with Stuart such that Eric and Stuart were Adam’s joint clients.  If not, the privilege applies; if so, no privilege exists.

Ohio’s test for determining a lawyer–client relationship contains subjective and objective components.  Subjectively, what did the putative client believe and, objectively, was that belief reasonable based on the surrounding circumstances?

Lawyer Adam’s affidavit provided that he only represented Eric, but this contradicted his deposition testimony, where he said he represented the LLC and the members.  As he put it, his clients were, “I guess, Eric, Stu and there’s two LLCs.”  Lawyer Adam also said that, “as a matter of law,” he represented Stuart but his interaction with Stuart was “limited.”

The court easily found a lawyer–client relationship and, applying the “joint-representation exception,” rejected Lawyer Adam’s privilege assertion and ordered him to testify.