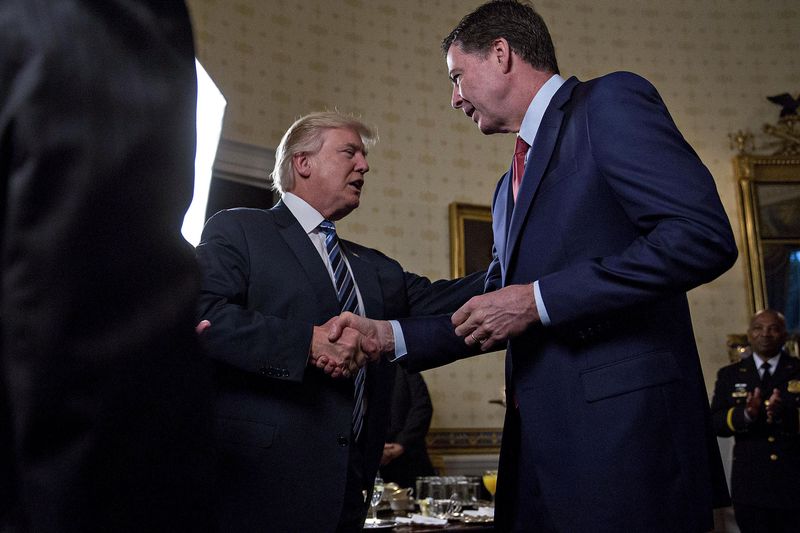 to the FBI’s investigation into former National Security Advisor Michael T. Flynn, told Comey: “I hope you can let this go.”

Will the President invoke Executive Privilege?

As Comey’s appearance date nears, several have questioned whether President Trump will invoke the “executive privilege” to prevent Comey from testifying about their conversations.  The reports are mixed.

Late Friday, June 2, the New York Times, citing unnamed “senior administration officials,” reported that the president will not invoke executive privilege to prevent Comey’s testimony, but that “Mr. Trump could still move to block the testimony next week.”  The Wall Street Journal, on the other hand, reported that “President Trump is weighing his legal options” about Comey’s upcoming testimony.

Whether President Trump has a legal basis to invoke the privilege is an entirely different question than whether he should invoke the privilege.  Lawyers and their clients frequently balance these often conflicting questions when deciding to invoke evidentiary privileges, such as the attorney–client privilege.  For example, a corporation may correctly claim that the attorney–client privilege protects its internal investigation, but nevertheless decide not to invoke it and produce the report to a governmental agency.

Here, White House legal advisors could opine that a good-faith legal basis exists to invoke the executive privilege over Comey’s testimony.  But if the president invokes the privilege, he could face political and public-relations repercussions, with many suggesting that the president’s privilege assertion is an attempt to “cover up the truth.”

Whether to face these repercussions is a strategic political question, not a legal one.  And it is secondary, with the threshold question remaining—whether the president has a legal basis to invoke the privilege.

Throughout American history, executive-branch officials have asserted the all-encompassing “executive privilege” to resist disclosing information to the legislative and judicial branches.  These nondisclosure efforts fell into a variety of privilege categories, such as privileges precluding the disclosure of military secrets, state secrets, law-enforcement investigations, government-informers’ identities, presidential communications, and the deliberative communications of executive agencies.

It is widely accepted that executive privileges improve governmental decision-making by permitting executive-branch officials to receive candid advice from subordinates.  Subordinates are less likely to freely communicate their advice without the executive privilege’s protection.

But this purpose necessarily conflicts with the long-held policy that the public has a right to examine public records.  This conflict produces a heightened tension that courts must navigate when deciding whether an executive-privilege subcategory protects government information from disclosure.

The deliberative-process privilege protects information that is both predecisional, meaning information communicated prior to an official’s decision, and deliberative, meaning information shared as part of the give-and-take of the decision-making process.  As an example, last year the USDC for the District of Columbia ruled that the deliberative-process privilege protected some, but not all, of the Attorney General’s documents related to the “fast and furious” investigation.  You may read that opinion here.

The presidential-communications privilege is the executive-privilege subcategory that will govern potential testimony about the Trump–Comey communications.  But what is its scope?

As far back as Chief Justice John Marshall’s opinions in Marbury v. Madison and the treason-related trials of Vice-President Aaron Burr, federal courts have recognized that presidential communications deserve some form of protection.  The legal debate over the scope of the presidential-communications privilege ripened during the Watergate era.

In 1974, the Supreme Court, in United States v. Nixon, faced the question whether the privilege protected President Nixon’s audiotapes from production in a criminal trial involving several individuals indicted by the Watergate grand jury.  You may read the Nixon opinion here, listen to Chief Justice Burger’s announcement of the opinion here, and listen to the oral argument here.

The Court ruled that there is a presumptive privilege for presidential communications that is “inextricably rooted in the separation of powers under the Constitution.”  The Court limited the privilege’s application by holding that the privilege is qualified, not absolute, meaning the privilege protection “must yield to the demonstrated, specific need for evidence.”

In an influential decision involving the OIC’s investigation into former Agriculture Secretary Mike Espy, the USCA—DC ruled that, to overcome the presumptively privileged nature of presidential communications, a party must provide a “focused demonstration of need, even when there are allegations of misconduct by high-level officials.”  This standard means that a party seeking the information must show that the evidence sought (1) likely contains important evidence and (2) is not available without due diligence elsewhere.  In re Sealed Case, 121 F.3d 729 (CADC 1997) (available here).

So, in sum, the presidential-communications privilege protects from disclosure communications that the President and/or his top advisors made in the performance of the President’s responsibilities.  The privilege is qualified and may be overcome by upon a sufficient demonstration of need and that this evidence is not available from alternative sources.

So, if President Trump invokes the presidential-communications privilege, how will this play out?  While some suggest that Comey could ignore the President’s privilege assertion and disclose their conversations, this seems unlikely.  The privilege belongs to the President, not Comey, and Comey would likely refrain from testifying until a court orders him to do so.

If it wants to challenge the President’s privilege assertion, the Senate Intelligence Committee would file an action in the USDC for the District of Columbia seeking to compel Comey’s testimony.  A legal battle would ensue, with the court having to determine the committee’s need for the testimony relative to its Russian-influence investigation and whether it may obtain similar evidence elsewhere.  And with an appeal likely, the ultimate decision could be delayed for months, if not longer.

Like all evidentiary privileges, one may waive the presidential-communications privilege by disclosing the putatively protected information to third parties.  If a court finds waiver, then it need not go through the demonstration-of-need analysis and simply order the Comey to testify.

The waiver standard is higher for the presidential-communications privilege. And even if the President waives the privilege as to one document or one conversation, that will not result in waiver as to related documents or related conversations.

In the Trump–Comey situation, there is some evidence of waiver regarding their purported conversation.  In his letter terminating Comey as FBI Director, which you may read here, President Trump stated that he appreciated Comey telling him, “on three separate occasions,” that the FBI was not investigating him.

And, in a subsequent interview with NBC News’ Lester Holt, the President discussed this conversation in a bit more detail.  You may see the relevant portion of that interview in this clip.

So, can President Trump invoke the privilege?  If he does, will the Senate Intelligence Committee challenge that assertion in court?  If so, will it be able to overcome the privilege presumption? Can it show waiver and, if so, how far would the waiver extend?  This could be an interesting week, months, and years.