The House Judiciary Committee served former White House Counsel Don McGahn with a subpoena, available here, to produce several documents on May 7, 2019 and appear for sworn testimony on May 21, 2019. The topics primarily relate to McGahn’s knowledge and comments detailed in the Meuller Report’s obstruction-of-justice section. The HJC no doubt wants to explore McGahn’s presidential 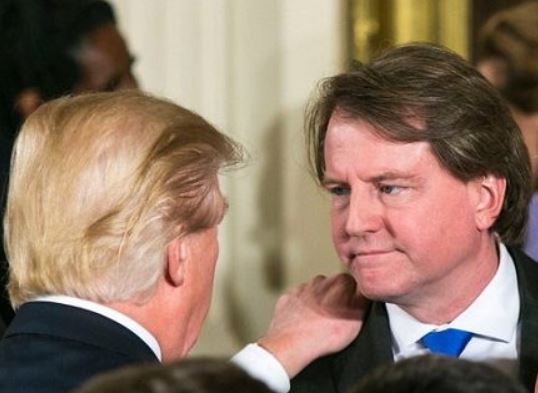 The Washington Post reported that the White House would assert executive privilege to prevent McGahn’s testimony. According to the New York Times, HJC Chairman Jerrold Nadler said that this assertion would “represent one more act of obstruction by an administration desperate to prevent the public from talking about the president’s behavior.” The White House did not back down—yesterday, April 28, 2019, Counselor to the President Kellyanne Conway told CNN that asserting privilege over McGahn’s testimony was “always an option.”

But has the President already waived executive privilege such that the HJC has no boundaries when it questions McGahn (if it ever does)? Some law professors, as quoted in this Associated Press report, think so, but precedent from the Nixon, Clinton, and Bush43 administrations cautions against immediate conclusions.

McGahn provided 30 hours of testimony to investigators during the Mueller investigation, and the Mueller Report contains portions of that testimony. The President, as confirmed in this tweet, allowed McGahn to voluntarily appear for the interviews with no restrictions on his testimony.

After General Barr sent Congress his Mueller Report summary, available here, but before releasing the Mueller Report, he gave a short press conference. Barr confirmed that he gave the President an opportunity to redact information—such as McGahn’s interview testimony—protected by executive privilege, but “following that review, the President confirmed that, in the interests of transparency and full disclosure to the American people, he would not assert privilege over the Special Counsel’s report.” Watch the excerpt of the press conference below.

Sounds like waiver, right? Before reaching a conclusion, let’s first specifically define the precise privilege at issue and how courts have treated the scope of any waiver.

Did the President Waive the Privilege?

In the attorney–client privilege context, a client waives the privilege by, among other actions, permitting its lawyer to divulge lawyer–client communications. And the related subject-matter-waiver doctrine holds that the waiver is broad.

Precedent tells us, however, that this waiver concept does not apply to the presidential–communications privilege.

The court held that it would consider the president’s statement disavowing the privilege in determining whether the privilege protected the tapes in the first instance, but not whether the president’s statement waived an otherwise valid privilege. And in a dissenting opinion, Judge MacKinnon argued that a rigorous waiver standard was essential for the “future ability of Presidents effectively to discharge their constitutional duties.” Nixon v. Sirica, 487 F.2d 700 (D.C. Cir. 1973).

The White House asserted executive privilege over some of the subpoenaed information, and the OIC claimed that the White House waived the privilege by publishing the report and issuing a press release. The court rejected the waiver argument, noting that, in the executive-privilege context, “a waiver should not be lightly inferred.”

The court refused to apply the subject-matter-waiver doctrine (an attorney–client privilege concept) to waiver in the executive-privilege realm. Rejecting this “all-or-nothing approach,” the court held that “the release of a document only waives these privileges for the document or information specifically released, and not for related materials.” In re Sealed Case, 121 F.3d 729 (D.C. Cir. 1997).

After Ambassador Joseph Wilson wrote a New York Times op-ed claiming that the Bush Administration had manipulated intelligence to support a claim that Iraq purchased uranium from Niger, the identity of Wilson’s wife, CIA operative Valerie Plame, was publicly revealed. During Special Counsel Patrick Fitzgerald’s investigation of that leak, Vice President Cheney voluntarily submitted to an interview with the investigation team.

In subsequent FOIA case, an interest group sued the DOJ seeking documents related to Cheney’s interview. The White House claimed that the presidential–communications privilege protected the records from disclosure. The plaintiff claimed that Cheney waived the privilege by voluntarily revealing information during his interview and by failing to assert any privilege at that time.

The court, noting that “a waiver should not be lightly inferred” in the presidential–communications context, held that Cheney’s disclosure to a Special Counsel was an inter-agency disclosure that did not constitute waiver. Citizens for Responsibility & Ethics in Washington v. U.S. Dep’t of Justice, 658 F. Supp. 2d (D.D.C. 2009).

This history guides the McGahn situation. It appears that McGahn’s voluntarily appearing for an interview with a special counsel did not waive the presidential–communications privilege because, like the Cheney situation, it was an inter-agency disclosure.

The President’s statement, conveyed through Barr, that he did not assert privilege protection over the Mueller Report did not, like the Nixon situation, by itself constitute waiver. However, permitting disclosure of McGahn’s conversations with the President through the Mueller Report may waive the privilege, but only as to those statements actually in the report.

As the Espy case instructs, waiver “will not be lightly inferred,” and a court may rule that the presidential–communications privilege covers any McGahn–Trump communications or documents not contained in the Mueller Report.

It will likely take months, if not years, to litigate the presidential–communications privilege issue in general and the waiver question in particular. And if so, whether a court allows McGahn’s testimony in full or limits it to statements in the Mueller Report—a good bet—will it even matter by then?