The USDC for the Western District of Texas (Austin) recently held that the attorney–client privilege protects from discovery communications between a parent company’s in-house counsel and management personnel of an “indirect subsidiary.”  The court ruled that the joint-client doctrine applied as the in-house lawyer supplied a well-crafted affidavit establishing the client relationship and all elements of the privilege.  Nester v. Textron, Inc., 2015 WL 1020673 (W.D. Tex. Mar. 9, 2015).  You may read the decision here. 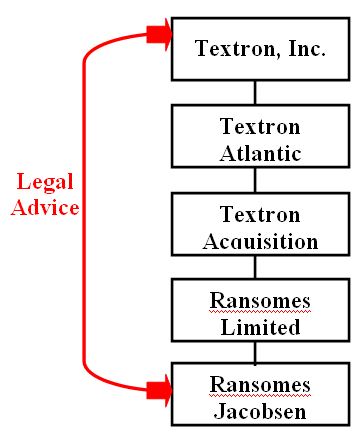 In this products-liability case, the plaintiff claimed that Textron negligently designed the “kick off brake system” on its E-Z-GO Workhorse cart.  In 2005, a fatal accident occurred in the United Kingdom involving a similar model distributed by Ransomes Jacobsen, Ltd (RJL), an indirect subsidiary of Textron.  The British Health & Safety Executive (HSE) investigated the incident, and Textron’s in-house counsel provided legal advice to RJL during the investigation.

The plaintiff sought in discovery communications between Textron, Inc.’s in-house lawyer and RJL personnel created during the HSE investigation.  Textron asserted that RJL was a joint client of Textron’s in-house counsel and, therefore, the attorney–client privilege protected these communications from discovery.

I commend for your review the Textron in-house counsel affidavit, available here, because it adequately covered all of the elements to establish the joint-client doctrine and the corporate attorney–client privilege.  The lawyer explained the Textron–RJL relationship and that RJL “engage[d] [him] to provide legal advice and counsel” related to the UK accident and the HSE investigation.

Regarding the communications, the in-house lawyer covered all of the necessary elements to establish the attorney–client privilege. He stated that he was Assistant General Counsel at the time and provided “professional legal services to and represented the legal interests of” RJL and Textron.  And as to the specific emails at issue, the lawyer persuasively stated that they “were confidential, and intended to remain confidential, and were made for the primary purpose of securing professional legal services” to RJL.

In this diversity case, the court correctly held that state privilege law supplies the rule of decision, and then applied Texas’s attorney–client privilege set forth in Tex. R. Evid. 503(b).   On a side note, it appears that neither the parties nor the court addressed whether Texas’s conflict-of-laws rules mandated application of UK privilege law.

Based primarily on Textron’s in-house counsel’s affidavit, the court ruled that he was “engaged to represent both RJL and Textron as joint clients during the 2005 HSE investigation.”  And because of this joint-client situation, the court ruled that “it is black letter Texas law” that the attorney–client privilege covers the emails between Textron’s in-house lawyer and RJL personnel.

What about the Allied-Litigant Doctrine?

Citing a 2012 Texas Supreme Court case, In re XL Specialty, 373 S.W.3d 46 (Tex. 2012), the plaintiff argued that Texas’s allied–litigant doctrine precluded the privilege finding.  In XL Specialty, a case that PoP profiled in this post, the Texas Supreme Court held that the common-interest privilege applies only to communications made by two parties during ongoing litigation.

Arguably, the allied–client doctrine would not apply to the communications sought from Textron/RJL because they pre-dated the litigation.  The Nester court, however, found this argument moot because XL Specialty “expressly does not change the long-standing Texas law that one attorney may simultaneously represent two or more clients on the same matter.”

Textron’s handling of this privilege issue provides guidance for in-house lawyers supplying legal advice to direct or indirect subsidiaries.  In-house counsel should document the subsidiary’s engagement of her services and request for legal advice. And after the attorney–client relationship exists, the lawyer must establish that the privilege covers the client communications by ensuring they were for legal-advice purposes, confidential when made, and remained confidential thereafter.

2015-08-06
Previous Post: No Privilege or Work-Product Protections for Communications between Insured and its Broker
Next Post: No 612 Waiver: Privilege Protects In-House Attorney’s Depo-Prep Review of Internal-Investigation Documents