How many of you simultaneously serve as a company’s in-house lawyer and its head human-resources officer, or know someone who does? Several, I know. This double-duty phenomenon produces knotty privilege issues when dealing with employee terminations and internal complaints, as one in-house lawyer (or was she an HR officer?) recently experienced.

In an FMLA retaliation case, a federal court held that the corporate attorney–client privilege did not protect notes and communications of a lawyer, who also served as the company’s Chief Human Resources Officer, related to an employee’s termination. And the court ordered her to produce those communications and sit for a second deposition to testify about them. Robbins v. Off Lease Only, Inc., 2020 WL 4904196 (S.D. Fla. Aug. 20, 2020). There are a few lessons from this opinion, so let’s have a conversation.

But in the DHR and CHRO positions, she claims, she continued to provide legal counsel to the company. These legal services spanned the spectrum, but specifically included employment-law advice. You may read her entire attestation here.

Then along came a man named Robbins. A Brazilian National, Robbins was a Finance Director at Off Lease. He voluntarily left for two weeks to return to Brazil but did not return. Robbins claims he had health issues and requested FMLA leave while Off Lease claims Robbins abandoned his job. There is no dispute that Robbins no longer works at Off Lease and that Robbins sued Off Lease for retaliation.

The CHRO/lawyer participated in several meetings and email correspondence regarding Robbins’ FMLA leave and termination. Robbins sought 34 of these notes and communications, but Off Lease claimed that the corporate attorney–client privilege protected them.  Here is one of the CHRO’s handwritten notes, which she marked as “Attorney Work Product—Privileged.” But, upon reading it, do you think the notes summarize a conversation where an employee sought legal advice from the CHRO? 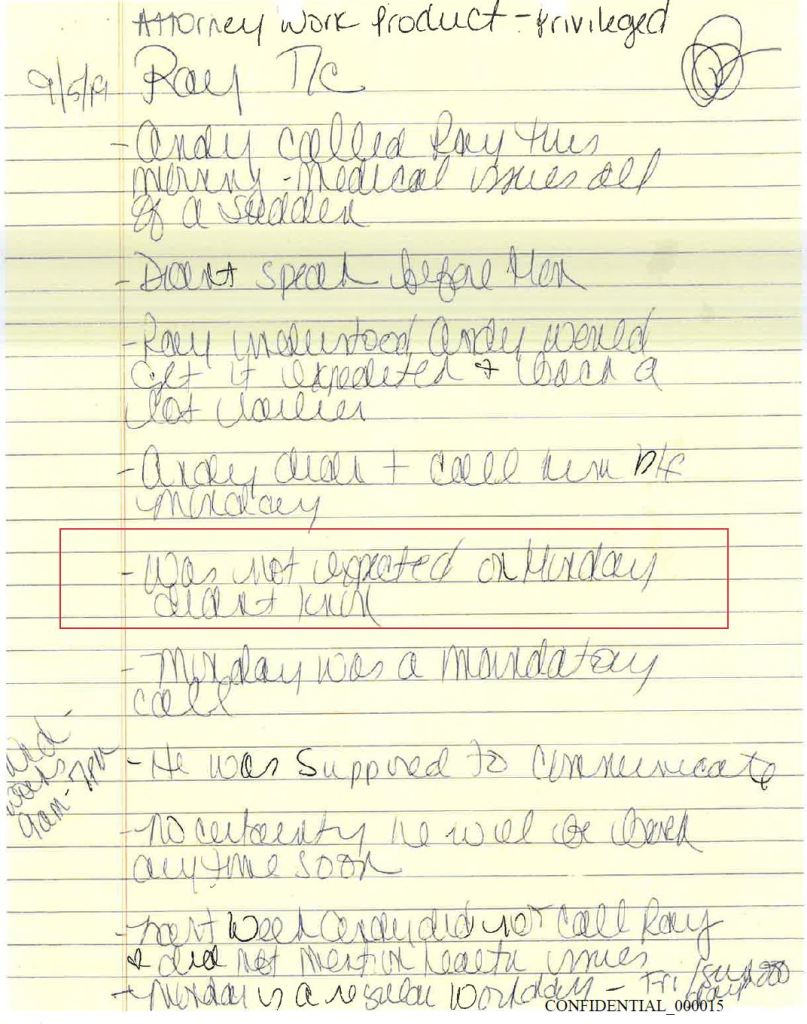 I Never Take Off the Lawyer Hat

The CHRO submitted her affidavit generally claiming that, despite her title, she provided legal counsel to Off Lease regarding “various legal issues” and specifically consulted on the Robbins matter. At her first deposition, Robbins’ counsel challenged her lawyer status by, first, pulling up her LinkedIn page:

Q.  Is there anything on this—we’re going to scroll down the rest of your LinkedIn on home page, but is there anything you can see on here that indicates you are counsel on labor and employment issues for Off Lease?

A.  Well, the “Esquire” part after my name indicates that I’m an attorney.

Q.  Do you feel that indicates that you are counsel for Off Lease on labor and employment issues?

But when asked to distinguish legal advice and HR advice, she testified:

Q.  How do you differentiate between requests from employees about HR issues when they might trigger attorney–client privilege?

And Off Lease’s outside counsel interposed this statement:

I mean, I know you would love to take the position that, you know, she’s the human resources officer and not an attorney, but she is. She’s—you know, she even put that in her affidavit to you that she handles all of their labor and employment issues. So, I mean, other than that, her being an attorney and representing the company in a dual capacity, I mean, it doesn’t matter whether she has it on Facebook or LinkedIn. It doesn’t change her position.

If interested in reading the deposition, objections and all, you may do so here.

Ultimately Off Lease withheld 34 emails and notes, including the note presented above, on privilege grounds. Robbins challenged those designations and persuaded the Court to do an in camera review. The Court began its review with this premise: where the challenged communications involve in-house counsel, courts apply the privilege protection “narrowly and cautiously.” And the Court offered this rationale for its narrow privilege application:

The rationale is that less protection is warranted when company officers have a mixed responsibility incorporating both business and legal aspects, and where their advice and communications are based on an on-going permanent business relationship rather than specific requests for legal advice.

The Court Saw a CHRO Hat—not an Attorney Hat

With this rationale in mind, the Court compared the CHRO’s affidavit—where she claimed to provide Off Lease with legal advice on “various legal issues”—with the 34 putatively privileged communications. Based on this comparison, the Court said that, despite her affidavit testimony, she “was performing her duties as CHRO, providing typical human resources business advice, rather than legal advice.”

And despite the CHRO’s “potential dual role,” “her receipt or involvement in the disputed communications … does not, in and of itself, protected these communications from disclosure under the attorney–client privilege.”

What about the Note, You Ask?

In the end, the Court ordered the CHRO to produce 29 of the 34 pages of emails and notes and ordered her to sit for a second deposition to answer questions about them.

As for the note above that the CHRO marked “attorney work product—privileged,” the Court said that, “despite the title on this document, Off Lease has failed to meet its burden of showing that this page is protected from disclosure by either privilege” (meaning the privilege or work-product doctrine).