A former Indiana prosecutor surreptitiously listened to not one—but two—conversations between criminal defendants and their attorneys.  Despite self-reporting and claiming lack of prejudice, the Indiana Supreme Court 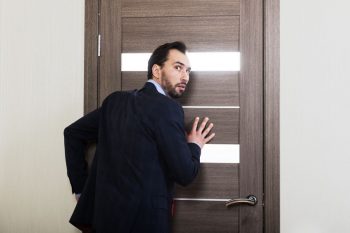 determined the prosecutor’s misconduct violated PR Rules 4.4(a) (violating third-person’s rights) and 8.4(d) (conduct prejudicial to the administration of justice), and imposed a four-year suspension “without automatic reinstatement.”  In the Matter of: Robert Neary, 2017 WL 5082686 (Ind. Nov. 6, 2017).  You may read the opinion here.

Listening from the War Room

Defense attorney David Payne arrived at the police station to interview his client, Brian Taylor, who faced a murder charge, and detectives escorted them to a room.  The room contained video- and audio-recording capabilities, so detectives told Payne to disengage the “toggle switch” “unless you want us listening to your conversation.”

The switch, however, controlled only the recording system and did not disable the live audio and video feeds.  Prosecutor Robert Neary, previously summoned “to assist with any issues that might arise,” and detectives watched and listened to the privileged conversation between Payne and Taylor.

The privileged conversation included Taylor disclosing the location of a gun allegedly used in the incident.  Not surprisingly, the detectives went to the location and recovered the gun.  Later, and pursuant to the police chief’s encouragement, Neary disclosed his conduct to Payne and self-reported to the Indiana Supreme Court Disciplinary Commission.

In a separate incident, John Larkin, also charged with murder, agreed to give a statement in return for receiving a reduced charge.  Larkin and his lawyer met with Neary, who conducted the interview, in a room that contained a recording system.

During a break, Neary left Larkin and his lawyer alone, but did not tell them that the video cameras continued recording their privileged conversation.  About a month later, Neary pulled the DVD and watched the entire interview, including the lawyer–client discussion held during the break.

In an attempt to completely avoid any disciplinary action, Neary claimed that his conduct caused no prejudice to either Taylor or Larkin.  Indeed, at this point neither has been convicted of any crime.

The Supreme Court did not buy this argument. It described Neary’s eavesdropping as “egregious” and “reprehensible.”  The Court expressed “outrage” and disapproval of Neary’s conduct, and found that he violated Rule 4.4(a), which prohibits lawyers from obtaining evidence that violates a person’s legal rights—here the privilege.  And it found that Neary violated Rule 8.4(d), which prohibits a lawyer from “[e]ngaging in conduct prejudicial to the administration of justice”

The Court suspended Neary for four years. He will not receive automatic reinstatement at that time, but must petition the Court for a return of his license.