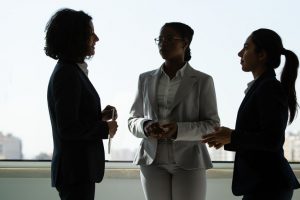 defendant.  If these plaintiffs–clients confer jointly with their lawyer, does the attorney–client privilege protect these discussions from discovery?

In a decision that properly distinguishes the joint–client doctrine and the common–interest doctrine, the USDC for Connecticut held—yes.  Supreme Forest Prods., Inc. v. Kennedy, 2017 WL 120644 (D. Conn. Jan. 12, 2017).  You may read the decision here.

The attorney–client privilege, of course, applies to a client’s confidential communications to her lawyer.  A client waives any privilege if she communicates with her lawyer in the presence of a third-party.  Here, Kennedy and Welch are arguably third-parties because they filed separate lawsuits—does that vitiate any privilege protection?

With it appearing that the parties confused two privilege-sharing concepts, the court cleared it up.  The joint–client doctrine is a non-waiver doctrine that permits parties represented jointly by the same lawyer on a matter of common interest to communicate without fear of privilege waiver.  Where one lawyer represents two or more clients, the attorney–client privilege protects their joint communications as to third-parties, meaning parties outside the attorney–client relationship.

The common–interest doctrine, also a non-waiver doctrine, permits parties with a common interest, but represented by separate lawyers, to share privileged information without fear of privilege waiver.  While courts apply the doctrine inconsistently, it generally applies where (1) a party or its lawyer communicates with a lawyer representing another party; (2) about a matter of common legal interest; (3) where the party makes the communication in confidence and maintains its confidentiality; and (4) the party has not otherwise waived the privilege.

The Supreme Forest court applied the joint–client doctrine to protect Kennedy and Welch’s communications with attorney Reilly.  Even though their separately filed lawsuits contained “minor factual differences,” “the gravamen of their complaint … was the same.”

So, in sum, Supreme Forest provides authority for the proposition that two plaintiffs, represented by one lawyer, may hold privileged joint communications with their lawyer even though they maintain separate lawsuits.