In a ruling that may puzzle in-house legal departments, the Arizona USDC ruled that the attorney–client privilege did not cover in-house attorneys’ handwritten notations on non-privileged documents.  The court’s primary reason was that the notations “were [n]ever communicated to anyone.”  Greyhound Lines, Inc. v. Viad Corp., 2016 WL 4703340 (D. 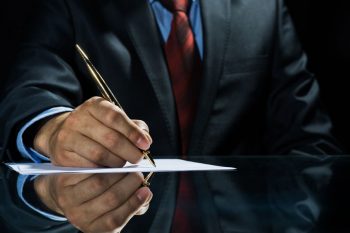 In this federal-question case, Greyhound claims that Viad is responsible for environmental clean-up costs on properties that Viad sold to Greyhound.  During discovery, Viad produced a set of non-privileged documents, but redacted notations on these documents made by one or more of its in-house lawyers.

Greyhound argued that Viad could not identify the notations’ actual authors and, in any event, they were not “communications” that would invoke the attorney–client privilege.

Viad, through an in-house lawyer affidavit, proved that he found the notated documents in “Viad’s legal department files,” although he could not identify the exact lawyer–drafter because “Viad at one time had over 35 attorneys in its law department.”  You may read the affidavit here.

The court assumed that an in-house lawyer prepared the notations, but rejected the privilege because Viad “failed to provide any evidence that the notations were ever communicated to anyone.”  Arizona privilege law, the court found, only protects “communications.”

The parties did not brief the choice-of-law issue, and the court turned to various methods suggested by “commentators” without reference to Wollersheim or other 9th Circuit law.  Would application of federal law have made a difference?  No briefing or analysis of this issue, either.

You may, and should, ask whether the work-product doctrine covers the notations.  We will never know—Viad did not make this argument.  Perhaps there was no basis for that argument—it requires evidence that the in-house lawyer prepared the notations in anticipation of litigation.

One can question the court’s application of Arizona state law.  The majority of courts, including the 9th Circuit, apply federal privilege law when the case involve federal claims, which this case did.

But the ruling that should concern in-house lawyers is the court’s statement that the lawyer notations were “[n]ever communicated.”  To be sure, federal privilege law covers communications, but a corollary consideration is whether the lawyers’ notations revealed client communications.

If so, the privilege should apply.  The court did not analyze this aspect but, to be fair, it does not appear that Viad made that argument.

The Greyhound case provides lessons for in-house counsel.  Lawyers should not automatically assume that the privilege covers their handwritten notes, but rather ask—at the time of creation—whether they are preparing the notes in anticipation of litigation or whether they pertain to client communications.

And if the answers are yes, then they should properly mark the documents as privileged, subject to the work-product doctrine, and keep the documents confidential.