In a 2-1 decision, the U.S. Court of Appeals for the D.C. Circuit ruled that the deliberative process privilege protects from a FOIA request a 1973 CIA draft 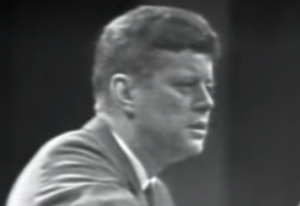 volume about the Bay of Pigs operation.  The draft, the last of a five-volume assessment by former CIA staff historian Dr. Jack Pfeiffer, detailed the author’s conclusions about the failed Cuban invasion. National Security Archives v. Central Intelligence Agency, 2014 WL 2053829 (D.C. Cir. May 20, 2014).  You may read the opinion here.

In April 1961,  President Kennedy authorized a CIA-led invasion of Cuba in an effort to diminish Cuba’s military in preparation for a hopeful democratic revolution and overthrow of Castro’s Communist regime.  The CIA provided air support while Cuban exiles launched from Guatemalan shores and landed on the banks of the Bay of Pigs.

The military operation failed and resulted in several casualties, including the lives of four American pilots.  President Kennedy addressed the pilots’ deaths, and the continued secrecy of their role in the operation, with these short remarks at a press conference.

In 1973, CIA staff historian Dr. Jack B. Pfeiffer drafted what became a five-volume treatise on the Bay of Pigs invasion.  The CIA later released Pfeiffer’s drafts of Volumes I through IV, but never released the fifth volume.  In connection with the 50th anniversary of the Bay of Pigs invasion, the non-profit group National Security Archives submitted a FOIA request for Pfeiffer’s fifth volume.  The CIA refused its production on grounds that the deliberative process privilege protected its disclosure, and defended that position when the requester filed suit.

The issue reached the U.S. Court of Appeals.  In a 2-1 decision, the Court ruled that the deliberative process privilege covered Dr. Pfeiffer’s fifth-volume draft.  The deliberative process privilege, a branch of the general executive privilege, precludes from disclosure agency communications that are both predecisional and deliberative.  Noting a “concern that is as old as the Republic,” the Court recognized that the privilege permits agency employees to participate in the free, uninhibited exchange of ideas without fear that their discussions will later be disclosed.

The Court held that the deliberative process privilege protects all “draft” agency documents because they are necessarily predecisional and deliberative.  While drafts may become final versions released to the public, the drafts remain predecisional.  The Court rejected all of the requestor’s counterarguments, including that the privilege should not apply because there was no “final” fifth volume, the CIA released the other four volumes, the CIA identified no harm in the fifth volume’s release, and the passage of time (50 years) renders the privilege inapplicable.

With no final version of the last of his five-volume assessment, Dr. Pfeiffer’s draft will always remain a draft that the public will never see short of the CIA’s voluntary disclosure.