A lawyer defending a Batson challenge to her peremptory juror strikes must present a neutral, non-discriminatory reason for the strike. Often the striking lawyer’s jury-selection notes supply evidence—one way or the other—of her reasons for excusing the challenged juror.  And these notes are work product—opinion work product—warranting the highest level of protection.

But in a case of first impression, the California Supreme Court ruled that a prosecutor waived work-product protection over his purportedly neutral juror-rating system by relying on it to defend a Batson challenge. 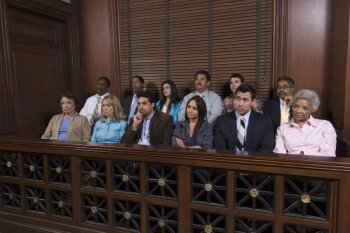 The Court adopted a burden-shifting analysis to decide a party’s Batson challenge to his adversary’s peremptory strikes.  The movant must first make out a prima facie case that the juror strike raises an inference of purposeful discrimination. The burden then shifts to the striking party, or really the striking lawyer, to articulate a neutral reason for excusing the juror.  The trial judge then assesses all relevant and surrounding circumstances to determine whether discrimination played a role in the lawyer’s striking decision.

For our purposes, the important part of the burden-shifting analysis is the striking lawyer’s burden to articulate a non-discriminatory, neutral basis for her decision.

In 1994, a California jury convicted Bryan Maurice Jones of capital murder and returned a verdict of death.  During jury selection, Jones’s lawyer lodged multiple Batson objections to the prosecutor’s use of peremptory strikes to eliminate Black jurors. Employing Batson’s burden-shifting analysis, the trial court decided that Jones’s lawyer made a prima facie case of discriminatory strikes and turned to the prosecutor for non-discriminatory, neutral reasons for his decisions.

Fast forward to 2014.  After the exhaustion of direct appeals, Jones’s appellate lawyers filed a habeas petition claiming, among many other items, that Jones’s trial lawyers provided ineffective assistance of counsel by failing to properly litigate the Batson challenge.  As part of this petition, Jones sought post-conviction discovery of the contemporaneous jury-selection notes created by the prosecution team before and during jury selection.

The prosecutors objected, claiming, correctly, that the work-product doctrine protected their jury-selection notes from discovery. But Jones argued that the prosecution team waived the work-product protection because they used the notes—and the numerical rating system—as a basis to defend the Batson challenge.  In other words, this is a simple case of at-issue waiver.

The Court recognized that a lawyer’s jury-selection notes can provide significant evidentiary support in favor of a Batson challenge.  But the opposite is also true—the lawyer’s notes could successfully counter claims of racial bias in exercising peremptory challenges.  The question, though, is when may a court compel a lawyer to produce his notes for purposes of a Batson challenge.

The Court noted that, like the attorney–client privilege, a party may impliedly waive work-product protection over materials when he puts those materials “directly at issue.”  Courts base an implied-waiver finding “on the need to protect the integrity of the judicial proceeding.”  It is the sword-and-shield analogy—a party may not rely on a document to establish key facts and simultaneously shield that document from disclosure to the adversary.

Here, the Court found that the prosecutor “invoked an undisclosed juror rating system in justifying his use of peremptory challenges.” The lawyer’s reliance upon this rating system was more than a lawyer simply glancing at notes to recall a juror’s answer provided during voir dire. Indeed, the Court stated that its decision in this case does not—

suggest that an attorney’s ordinary reliance on notes throughout trial would necessarily waive work product protections.

But in defending the Batson challenge, the lawyer here made “testimonial use” of undisclosed writings.  The Court found that the striking attorney “placed in issue information that goes to the heart of the question before the court, whether there has been discrimination in jury selection.” And that decision “constitutes waiver of any claim that the information may be withheld as protected work product”:

The point, in the end, is simple: A striking attorney cannot both stand on such a rating system and assert privilege over it.

The Batson burden-shifting analysis required the prosecutor to explain the basis for striking Black jurors, and he did so with, in his view, the best evidence available: the prosecution team’s race-neutral juror rating system.  The prosecutor did not voluntarily put his juror-rating system at issue—he had to do so to defend the Batson challenge.  Isn’t this a Hobson’s choice—either defend Batson with your best evidence and waive work-product protection or keep the best evidence confidential and increase the risk of a Batson loss?

Perhaps, but the take-away here is that, unless a lawyer (with client consent) has no concern about disclosing his work product, the only route to avoid work-product waiver is to verbally explain that he struck the juror because of non-discriminatory characteristics—such as occupation, volunteer activities, and the like—discovered through voir dire.  Reliance upon notes, rating systems, or evaluation methods waives work-product protection over those materials—at least according to the California Supreme Court.

2022-02-24
Previous Post: An Examination of the Bank-Examination Privilege (III): Putting it All Together
Next Post: Sharpen Your Privilege Axe for Board Minutes and Reports