During an investigation interview by the State Medical Board of Ohio, a physician—thinking he must answer fully or lose his license—admitted sexual misconduct with three patients. At his later criminal trial, the physician asserted his self-incrimination privilege to exclude his admission.

The Ohio Supreme Court, with a lone dissent, rejected the privilege because the doctor’s admission was voluntary and his concern about losing his license was not “objectively reasonable” to rise to the level of improper coercion by state officials. The majority’s finding came even though the physician had a statutory duty to cooperate, faced 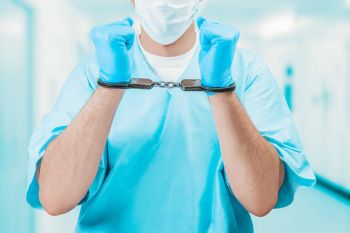 After three patients complained that an Ohio physician inappropriately touched them during office visits, the State Medical Board and the local police opened investigations.  A state statute (Ohio Rev. Code § 4731.22(B)(34)) required the physician to cooperate in the investigation. The statute also required the medical board to “limit, revoke, or suspend” the physician’s license if it found that he violated one of several prohibited actions.

A law-enforcement officer, of course, may not force a suspect to provide statements or otherwise cooperate in an investigation. The physician nonetheless spoke to the local law-enforcement agency and denied any inappropriate conduct. But the officer had another opportunity—he could obtain information gathered by the medical board’s investigator.

The privilege against self-incrimination permits a person to refuse to answer questions from government officials that may incriminate himself in future criminal proceedings. The privilege is not self-executing, so the person must assert it to achieve its benefits. But under Miranda and Garrity v. New Jersey, 385 U.S. 493 (1967), the person need not claim the privilege if subject to a custodial interrogation, including “by coercion when there is a penalty for asserting the right.”

Here, the physician did not assert the privilege when the medical board’s investigator questioned him about his patient interaction. But the state statute required the physician’s cooperation or face a mandatory penalty—a limitation, revocation, or suspension of his license to practice medicine.  But did the statute require him to answer truthfully or face the complete loss of his license?

The majority of Ohio Supreme Court justices held that a different analysis applies where a person under investigation has not been expressly presented with the choice of answering questions or losing his job.  In this situation—the one faced by the physician—the court applies an “objectively reasonable subjective belief” test.  Under this test, the person is compelled by threat of job loss (here loss of medical license) if—

1.   The person subjectively believed that asserting the privilege would lead to discharge; and

2.   That belief was objectively reasonable under the circumstances.

The court agreed that the physician subjectively believed that he would lose his license if he did not answer the investigator’s questions but disagreed that his belief was “objectively reasonable.”

The objectively reasonable test requires a showing of “some demonstrative coercive action by the state beyond the general directive to cooperate.” The possibility of the loss of a job (or medical license) is insufficient.

The court found that the statutory duty to cooperate was just that—a requirement to cooperate. The statute has a mandatory penalty for the failure to cooperate, but the penalty of license revocation is not mandatory. Indeed, as the court noted, “it is one of several sanctions available to the board.”

And so there was no coercion; no privilege violation; and no basis to exclude the investigator’s testimony at the physician’s criminal trial.

The Dissent See a Straw Man

The lone dissenting justice—and all of the court of appeals judges—disagreed. These jurists found the investigator’s interview of the physician rendered the physician’s subjective belief objectively reasonable. The medical board investigator—knowing that the physician denied wrongdoing to the law-enforcement officer—obtained a different result and shared that with the officer.

Think of it this way—if the law-enforcement officer had appeared at the interview with the medical board investigator, would the physician have answered the questions? Would he have admitted to wrongdoing?

2021-02-11
Previous Post: Spouse Asserts Emotional-Distress Claim, Waives Privilege over Marriage Counseling Records
Next Post: To CC, or Not to CC, That is the In-House Privilege Question