In a FLSA collective action case, a Tennessee federal court ruled that the attorney–client privilege did not protect a 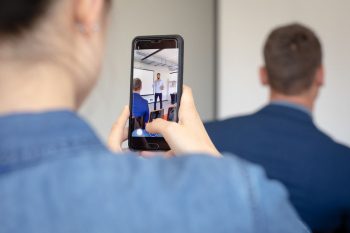 secret recording of class-counsel’s recruitment meeting. The privilege did not apply even though each attendee signed a registration sheet declaring that, “[b]y signing in, you acknowledge that you are here to seek legal advice concerning your right to overtime pay.”  Pierce v. Wyndham Vacation Resorts, Inc., 2014 WL 4748309 (E.D. Tenn. Sept. 23, 2014).  You may read the court’s opinion here.

Plaintiffs’ counsel required each attendee to sign a registration sheet, and this sheet contained the following declaration: “By signing in, you acknowledge that you are here to seek legal advice concerning your right to overtime pay from Wyndham.”

Counsel also claimed that they opened the meeting by stating their understanding that all attendees were seeking legal advice and, if not, they should leave.  No one left.  For counsel’s full description of the meeting, you may read his affidavit here.

Counsel considered that an attendee may record the meeting, telling the crowd that this was an “attorney–client meeting” and that everything said is “confidential.”  Counsel jokingly stated that, if anyone was recording the meeting, he will later find that person and “beat you to within an inch of your life.”

One of the attendees, however, secretly recorded the meeting.  Class counsel exerted confidence in their legal ability, stating, amidst applause, that their firm has over 300 lawyers and is “ready for whatever the Defendants might bring to bear.”  Counsel claimed they had “done a lot of these cases” and did not “remember ever losing one.”

The question was whether the attorney–client privilege protects the recording.  As the court had federal question (FLSA) jurisdiction, federal common law supplied the rule of decision.  After listening to the recordings, the court ruled that plaintiffs’ counsel failed to show that the recording contained client communications made for purposes of rendering legal advice.  The recording revealed simply that class counsel discussed their own qualifications, the lawsuit in general, and the FLSA opt-in procedure.  The attendees responded with “applause, laughter, and an occasional wisecrack.”

And the registration sheet—declaring the meeting was for purposes of rendering legal advice—did not persuade the court otherwise.  The court found this “sign-in sheet statement” neither controlling nor instructive on the privilege question.  The court noted that a client’s privilege acknowledgement is no substitute for actually establishing the privilege’s essential elements, and determined that it was “inappropriate to so rule in this case.”