I suppose it’s inevitable in these media times. When a company with a headline-grabbing name suffers some legal defeat, it makes the, well, headlines.  And so it is with Google’s ongoing battle at the NLRB to protect from discovery communications, recommendations, and opinions exchanged 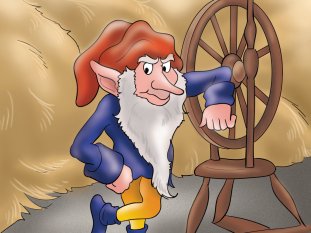 between Google’s in-house lawyers and a union-organizing consultant.  Google suffered—at least at this time—a significant privilege defeat, as the New York Times, CNN, and various other news outlets proclaimed. But let’s go beyond the headlines and soundbites to understand what really happened and why.  Perhaps there are a few lessons for us regular ole non-headline-grabbing lawyers and clients.

Employees of a staffing agency successfully petitioned for recognition of a union, and this organizing activity included employees working at a Google facility in Palo Alto. Although the petition did not name Google, the company’s management and legal department had a front-row, management view of the good, the bad, and the ugly of union-organizing campaigns.  This experience begat Project Vivian.

Project Vivian was the code name for a ramp-up effort by Google’s legal department to understand the ins-and-outs of a union-organizing campaign so that it could advise the company if and when its employees filed a petition to recognize a union. A Google in-house lawyer, who advised Google business units on labor-and-employment matters, led Project Vivian.

One of the in-house lawyer’s first Project Vivian acts was to find and retain IRI Consultants to provide advice regarding labor relations and organizing campaigns.  And correctly anticipating a future privilege challenge to the legal department’s communications with IRI, the in-house lawyer took steps to establish the privilege.

“I Did All the Right Privilege Things”

The attorney–client privilege may cover a consultant’s communications with in-house lawyers if the consultant provides information to in-house counsel so that she can provide her employer–client with legal advice.  As I have examined before, courts often look to the company’s engagement letter to discern whether helping lawyers provide legal advice falls within the scope of the engagement. 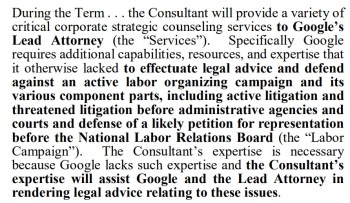 And if this belt was not clear, a separate section added these suspenders—

The engagement letter’s language provides good evidence that IRI’s purpose was to provide information to Google’s in-house lawyers so they could render legal advice on union-organizing campaigns.  But the Project Vivian team did more—they quite methodically marked communications as “privileged and confidential.”  On the surface, this looks like privileged engagement.

But what’s below the surface?

Separate from Project Vivian, four Google employees filed unfair-labor-practice charges against Google after the company terminated them for violation of various internal policies.  The NLRB issued a complaint against Google for these alleged infractions.  During the course of this proceeding, other employees intervened, and ultimately subpoenaed documents related to Project Vivian, including those related to IRI Consultants.

The Special Master then issued successive interim orders that stingingly rejected Google’s privilege claims.  After the First Interim Order, available here, Google filed a motion to reconsider and, for the first time, submitted the declaration of the in-house lawyer that led Project Vivian.

In the declaration, available for review here, the in-house lawyer explained the reasons for and the process of retaining IRI Consultants.  She confirmed that Google retained IRI to help her “advise Google in preparing for a potential election petition and representation case proceeding.”  But she also stated that IRI prepared “training and education materials for managers and employees” that she could review in the future as reference material.

The declaration did little to dissuade the Special Master from his opinions. In a Third Interim Report, available here, he again hammered Google on its privilege claims with even more stinging language.

No Legal-Advice Presumption for In-House Lawyers

The Special Master saw flaws with Google’s legal standards and its characterization of the withheld documents. The Special Master rejected Google’s argument that in-house counsel, like outside counsel, enjoy a rebuttable presumption that their communications are for legal-advice purposes.  The rule, instead, is that—

Communications with in-house counsel are not presumptively privileged, but rather are cloaked in privilege only if the company makes a clear showing that the in-house attorney participated in a professional legal capacity.

There is no legal-advice presumption because “in-house counsel may operate in a purely or primarily business capacity” and “corporations may not conduct their business affairs in private simply by staffing a transaction with attorneys.”

While the Special Master stated that in-house counsel “may” operate in a business capacity, the Google in-house lawyer specifically stated in her declaration that she was all legal, all the time.  But no matter—there is no legal-advice presumption for her.

Presumptions aside and despite the lengths that Google took to ensure the IRI engagement was a privileged one, the Special Master simply disagreed with Google’s characterization of the IRI communications and deliverables as related to legal advice.   Rather, upon reviewing some—but significantly not all—of the documents, he found that they were campaign and training materials with anti-union messaging tailored for employees and social media—they were not legal advice.

The Special Master noticed—and did not like—that IRI transmitted some documents to the in-house lawyers through Google’s outside counsel.  And he noticed that many documents had the “facial appearance” of being privileged but were not, finding—

This effort at creating the impression of legal advice is not only disingenuous, but fails under established precedent holding that a party cannot cloak otherwise unprivileged material in attorney–client privilege simply by sharing it with legal counsel.

In sum, Google had a well-worded engagement agreement with IRI, designated many communications as “privileged,” and had an in-house lawyer confirm the legal-advice purposes. But the Special Master’s review of the putatively privileged document belied these assertions, and he concluded that Google—

Google, as you might imagine, disagrees and has filed a lengthy and pointed permission seeking an appeal, available to review here.  Google argues that the Special Master made many factual mistakes.  He only reviewed documents in two of the seven binders—which is true.  He said that the engagement agreement was redacted even though Google produced—in an unread binder—an unredacted version.  And Google countered his legal findings, in particular that the Special Master missed the argument that in-house lawyers may seek expert advice under the cloak of privilege, so long as the in-house lawyer plans to use that advice for the primary purpose of rendering legal advice.

So, despite all the news articles proclaiming Google’s great privilege loss, this one is not quite over.